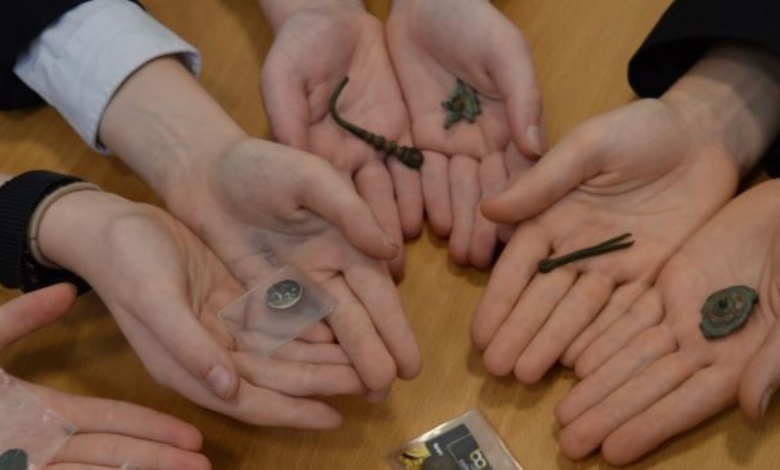 The Hinckley Academy History department are working with the University of Leicester School of Archaeology and Ancient History on the study of Roman Leicester.

The History department are working with the University of Leicester School of Archaeology and Ancient History on our study of Roman Leicester. This means we have access to lots of information about artefacts and buildings found in Ratae Corieltauvorum (the Roman name for Leicester). We have explored some of the finds made in recent years including curse tablets and love tokens found on the site of the Vine Street Villa, under what is now the John Lewis carpark! We also found out that 6% of the skeletons in the large Roman cemetery near the River Soar had African heritage, showing Leicester has been a diverse city for 2,000 years.

As part of our study we have been able to handle Roman and Celtic artefacts and coins, including a 2,000 year old coin from the Corieltauvi tribe who lived in this area before the Romans came.

We have also been able to email Cori our questions about life in Leicester in Roman times and he responds straight away! Cori is a Roman Solider Rat (Ratae Cori – get it?) who the team at the University use with schools.

Through this we found out that objects in Leicester range from pottery from just down the road in Northamptonshire, to items all the way from Egypt. Talking of Egypt, Roman soldiers stationed there were advised to bang their sandals on the ground in the morning to check there wasn’t a scorpion hiding inside. The oddest thing we found out, in response to Jasmine’s question, was that spider web was used to stop a wound bleeding!

Thank you, University of Leicester, we have enjoyed learning about life around here 2,000 years ago.